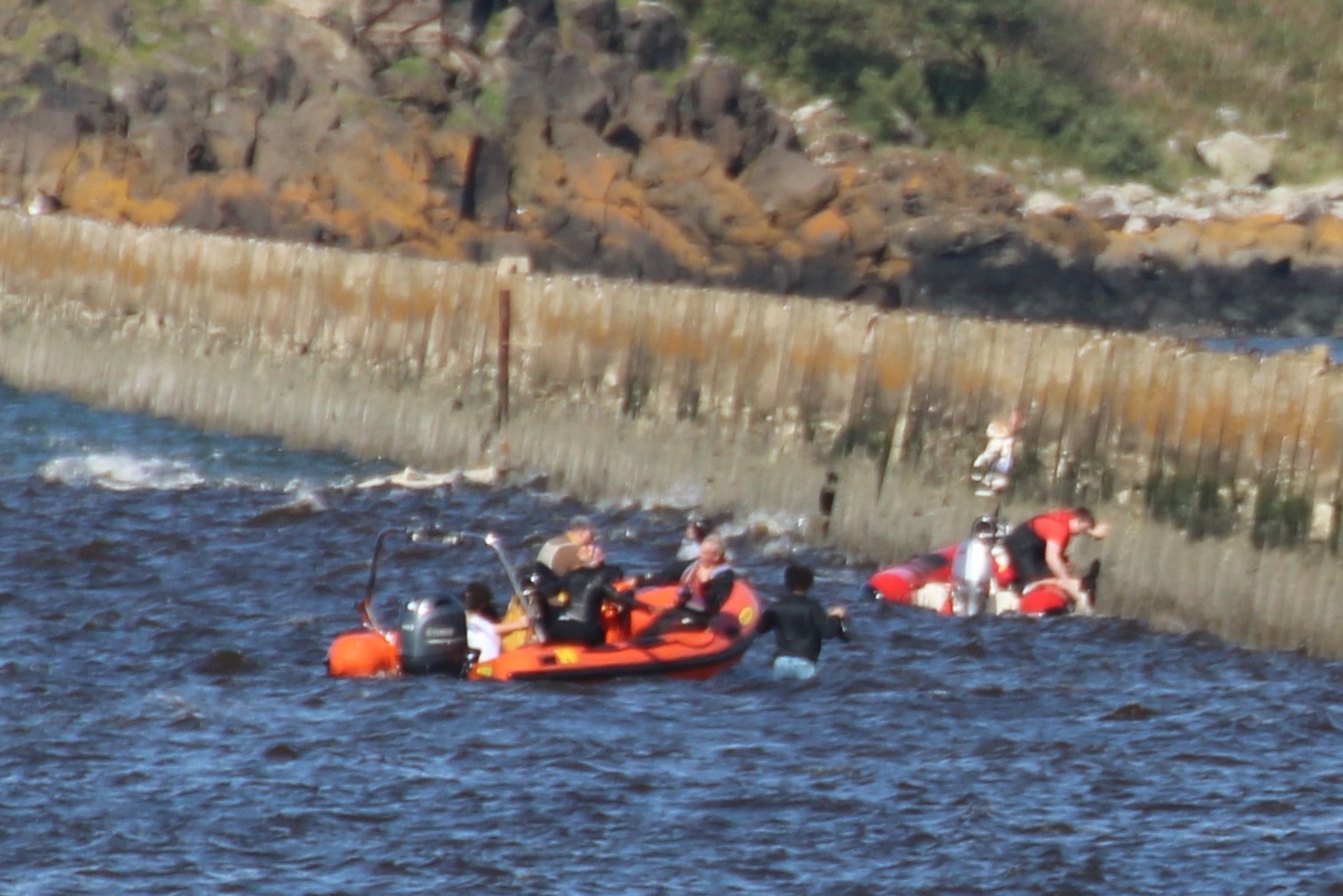 The weather was fine with the wind between F3 & F4 but gusts of F5. As soon as we were out of the river, we could see a lot of people in the water, stretched out between the island and the shore. Due to the proximity of those closest to the shore, at least 4, and the fact that they were still managing to keep going, those much further out were in the greatest danger as they were all up to their waists in the sea. I kept in contact with Aberdeen advising them of the situation and our position but due to transmission signal difficulties, my reports kept needing to be repeated, By the time Aberdeen confirmed they knew we were close, we already had the first 2 people on board from further than halfway out. I immediately advised Aberdeen that the first 2 had been recovered and we were proceeding to the next group they sounded surprised and asked me to repeat the message by which time the next 3 were being brought aboard. We asked the group if they knew if there were any more and they assured us there were no more on the walkway and only 2 persons with their 2 dogs still on the Island. I updated Aberdeen and advised that our other Rescue boat was recovering another 2 persons and a dog. I also said that there were still 2 persons on the island with 2 dogs and, by that that stage, we couldn't see anyone else in danger. They advised that the lifeboat was on its way and should be close, which it was, and it would carry out a sweep of the island and surrounding area.

Tiger Shark returned to the inner slip at speed, the steps being considered a risk due to a still low river height, and kept the people on board till the local Coastguard could collect them for interview and details. Lawrie joined us to help Ben.

Meanwhile, Ben on his own, social distancing etc., was starting his return to the river, having recovered a lady on the causeway and, separately, a man with a dog who had managed to climb on to one of the teeth but not without suffering a lot of cuts.

My daughter had come down to Cramond just before the incident was set off and, realising something was amiss, started to take photos and set off towards the outer slip area. She has kindly passed them to me and we had a close look yesterday. It seems that Ben was, unknowingly, more of a hero than certainly I was aware. His rescue work was significantly more dangerous than ours. With the lady on the causeway being in the water, he went to her first, bow in and engine in clear water just as the manual advises. He told her to stay on the causeway and not step out until he was in position but, unfortunately, she did step off the causeway and immediately sank. To make matters worse, she finished up between 2 of the teeth which meant taking Berserker over the causeway. Ben positioned Berserker up against the teeth to avoid going through and grabbed hold of the lady. As she could not swim, Ben had to give her a lot of assistance to pull her in to Berserker which, he managed without a crew. He then recovered the man and dog. He told me that the man could swim and it may be that he was able to help with the lady's recovery but even so, without Ben's assistance, the outcome would have been dire, possibly fatal. Ben would normally have applied power to return the casualties to shore but, as soon as he put power on the lady screamed in panic and the man also 'expressed alarm'! Hence with the lady in severe shock and the man clearly showing signs of hypothermia, their return was a very stately 5 or so knots. With the Coastguard personnel all being out at the outer slip area, Lawrie took the them along. Both received immediate attention from the Coastguard and Ambulance people. Lawrie was stopped by a Policeman who expressed his confusion and wanted lots of info but Lawrie, keen to go racing, directed him to the Coastguard. According to Helen, my daughter, she saw one lady whom we had rescued covered in blood and being given first aid by a Coastguard. Several others seemed to have minor injuries.