Cramond Island and approach to Cramond

Cramond Island lies about three-quarters of a mile NNE of Cramond and is connected to the mainland at low water by sandbanks, a raised breakwater and a concrete boom which shows approximately 1m at HW. The distance from Ferry Cottage to Seal Rock at the north end of the island is one nautical mile.

To permit the passage of vessels through the concrete boom, there is a gap marked by a white-painted arrow and a tide gauge. The depth of water here is about the same as the river bar. Vessels should not attempt to pass through any other gaps.

Depending on wind direction, good anchorages can be obtained on the west side of the island in Duckhouse Bay or in the bay to the south of Middle Point. Both these bays dry at low water but at high tide have sandy beaches ideal for picnicking. An alternative anchorage may be found on the east side inside the Partan Rock, which dries 1.1m. The position of this rock is indicated by white painted transit marks on the island.

Sand and mud banks dry out for a mile offshore from Cramond, and keelboats should stay in the deep channel when navigating in or out of Cramond. The west bank of the channel is marked by buoys and poles which should be left 3m to starboard on the way in.

The outer four navigation markers are large green buoys numbered 1 to 4, and the inner five channel markers are poles. 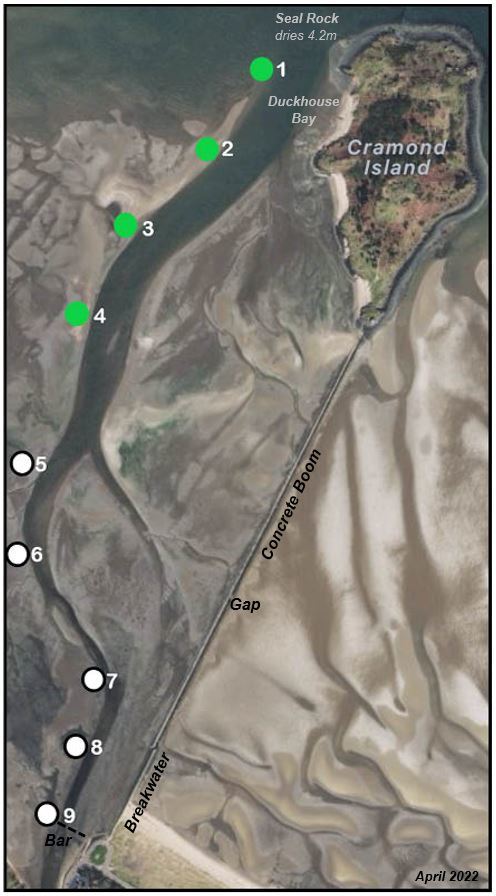 The photo chart is an approximate guide to buoy and pole positions. The GPS coordinates for the channel markers are:

The tide gauge on Pole 9 at the bar indicates the depth of water over the bar. There is a gap in the bar immediately to the east of the bar pole which should be used if possible. 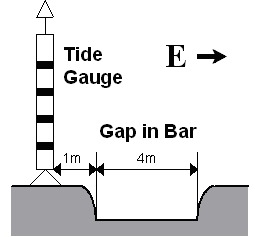 Craft leaving the river have right of way.

The Club will not be held responsible for absence or alteration of the channel marks which are intended as aids to pilotage only.